We’ve nineteen dead on the Buin road,
Ten more on the Jungle track,
And all day long there’s a broken tide
Of our wounded streaming back.
We’ve fought all night by the Hongarai,
With never a bite or sup;
And tomorrow’s back-page news will quote:
“Our Soldiers are mopping up.”

As dawn wakes with a jaded eye,
Discarding its misty pall,
White crosses mourn on the Numa trail
For fellows who gave their all.
In Taimba’s ridges, Sorokin’s groves,
They drained the dregs, Hell’s Cup;
The blood they gave was a passing thing,
They were merely “Mopping up.”

The screaming silence of ambushed swamp,
The horror of obscene bog,
The vicious foe in a filthy league
With blanketing rain and fog,
Are trifling things which the critics know
Should never hold heroes up.
Good Lord!  Why, this isn’t war at all!
We simply are “Mopping up!”

We make no claim to heroic mould,
But this little boon we ask;
Those armchair critics please send up here
To share in our “simple task.”
When they’re on intimate terms with Death,
And have tallied the blood-cost up,
Maybe they’ll coin more adequate phrase
Than casual “Mopping up.”

I found this poem among my father’s papers relating to his service in Bougainville during World War 2.  Dad was a bit of a bush poet, so initially I wondered if this was one of his own efforts, but a bit of research soon ruled that out.

“Black Bob” was Lieutenant Adrian L. O’Neill (1907 – 1980) of 38th Battalion.  From Echuca, Victoria, he enlisted in Narrabri, NSW and served in the Solomon Islands and Bougainville during World War 2.  His satirical poems compared the reality of jungle warfare with the perceptions of government officials, the press and those at home.

My father, Charles Dewar Haughton Pilkington (1908 – 1978),  known to all as Haughton or ‘Haught’, served as an Australian Army Chaplain in World War 2.  He was stationed at Mt. Isa in Queensland, then Bougainville and Fauro Island in the Pacific Islands.  Army chaplains carried the rank of Captain, but were generally known to the men as “Padre”.

A much more in depth account of the Bougainville campaign than I could ever give can be found on the Last Battles website – In the Shadows.

photos from private collection C.D.H. Pilkington ©
Dad never spoke about his war service experiences in anything other than a general way.  As a Chaplain, I don’t think he would have been involved in the hands-on fighting.  His work would have involved providing spiritual and emotional comfort to the wounded and dying.
I know from the records I have seen that he conducted battlefield burials – done hastily at the end of the day, with the exact locations of each burial carefully recorded in relation to surrounding landmarks, so that the bodies could be exhumed at a later time and re-interred in the Torokina War Cemetary.
After the war, all those buried at Torokina were again exhumed and transferred to the Bomana War Cemetery in Port Moresby, PNG.

Once the day’s burials were over,  the Chaplain’s work included writing to the family of the deceased soldier.  This could not have been an easy task, but any fragment of comfort or information provided would have been welcomed by those at home, as a follow-up to the stark reality of the official telegram.  Among Dad’s papers are a handful of letters written back to him by the families of fallen soldiers.  The contents reveal how much appreciated the letter written by my father was.

As one mother wrote:  “It was such a relief to know that he did not have to suffer long, and that he had a decent burial.”

Another widow wrote: “it is of great comfort to know he had a proper Christian burial and was not left lying in some unknown spot.”

Some day, I would like to use these letters to write about these men, regular Aussie blokes who gave their lives in the service of their country.  But that’s another project, and for now I would just like to acknowledge these men today, and to recognise all those who served - in Bougainville, and all other conflicts.

The first face-to-face encounter I had with Halloween was back in the mid-1980's, when 2 young boys came knocking on our front door afte... 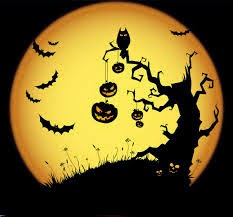